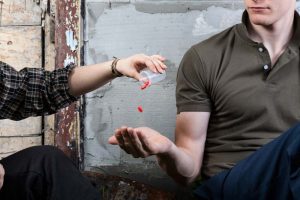 In many ways, the United States is known as the land of excess. We make cheesy pizzas with hot dogs in the crust, we clamor for decadent iced coffees with the calorie content of an entire meal. We are consumed by excess of food, money, clothes, cars, and technology. And when it comes to drugs and the acceptance of drugs in our culture, we are in excess of that, too.

Nowadays, there is a new form of acceptance of drugs in our culture. Unlike the drugs of decades past, these drugs are legal, always pure, and dispensed everywhere in the country. They are prescription drugs and they are being widely abused. From stimulants to tranquilizers to opiates, the United States consumes 75% of the world’s prescription drugs while making up only 5% of the world’s population (NIH, 2014) It is not only common to take these drugs, it is completely socially acceptable to do so because they are medications.

It’s true; they are medications that are prescribed (and often over-prescribed) by a doctor. However, startlingly, more than half of the people who have taken these prescribed medications (painkillers, stimulants and tranquilizers) got them from a friend or relative- not a doctor. Thirty-three percent of teens said they would use prescription drugs over street drugs because there’s less shame attached to prescription drug use (NIH, 2014). This speaks to the acceptance of drugs in our culture because substances that have the same mind-altering effects as cocaine or heroin are viewed as “safer” and more suitable for experimentation. After all, our kids aren’t risking an addiction; they’re just experimenting, right?

The notion of experimentation brings us to yet another aspect of the acceptance of drugs in our culture. The idea that it is normal for teenagers to experiment with alcohol, tobacco and marijuana is widely recognized and tolerated. These behaviors are even seen as a right of passage in our society.

Perhaps the most current example of the acceptance of drugs in our culture is the legalization and decriminalization of marijuana through out several of the United States. Marijuana has gone from being demonized as taboo and a social ill (think Reefer Madness circa 1930s) to being seen as harmless as alcohol or cigarettes.

From movies to music and more, the acceptance of drugs in our culture is apparent. And no matter your views on whether it is right or wrong, it is likely here to stay because drugs have not only been accepted by our culture, they have become a part of it.