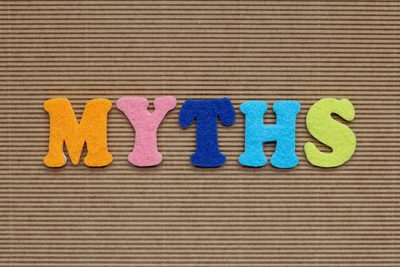 When I was growing up, the common belief about addiction was that it began with the first hit.

During D.A.R.E. week, a school program with the slogan “dare to not use drugs” we were taught to “just say no.”

We watched a video once where there was a rabbit addicted to crack. It showed him smoking crack once and then immediately chasing the drug and living in an alley the rest of his life. The problem with this video is that it wasn’t accurate: addiction happens much differently.

If someone believes that addiction happens immediately, and then they try a substance like cocaine, heroin, or even alcohol without feeling any addictive effects, they might assume that they just don’t have an “addictive personality.”

Myths like these can be harmful and lead someone into believing that unless they have certain traits that they are not addicted.

Here are the top ten myths about why people become addicted:

1. Addicts suffer from a character flaw.
Nothing could be further from the truth. Addiction happens from compulsively using a substance. Any substance can change patterns in the brain, then fools the user into believing that they need to continue using. According to the National Institute on Drug Abuse, addiction is a brain disease, and there is no one factor that causes anyone to become reliant on a substance.

3. All addicts come from bad families.
Not all addicts come from a dysfunctional background. Environment can play a role in a person becoming an addict, but that does not mean that every addict comes from a bad family. There are plenty of people who come from a good upbringing with parents who never suffered from substance abuse.

4. Addicts are not intelligent.
With all the awareness in today’s world, why would anyone be stupid enough to pick up a drug habit? Surely, the person must be functioning cognitively low. The truth is actually the opposite. Many people who wind up addicted to substances are very intelligent. In fact, the first person to be documented as an addict, according to multiple sources, is Sigmund Freud, one of the leading minds of psychology. It is said that he recorded his love for cocaine in letters to the drug.

5. Addiction happens if you use drugs.
In a recent study by the NIDA, they found that just 15% of people who try cocaine end up addicted. About 12% of people who try alcohol become addicted. Using drugs does not cause addiction. Addiction is a compulsive behavior caused by changes in brain chemistry that occur with regular use (see #8 below).

6. Addicts are easy to identify.
Take me to a grocery store, and I’ll point out the people who will become addicts. This myth relies solely on stereotypes saying that only certain types of people become addicted to substance, people who are:

Again, there is no clean label to slap on the face of addiction. Addiction survives in all ethnicities, economic backgrounds, and education levels. Addiction impacts all walks of life.

7. People become addicted to rebel against society.
Criminalizing addiction is what has led to the overpopulation of inmates in American prisons. Addiction is a behavioral problem. Even though many of the hard drugs that we hear about most often are illegal, it doesn’t mean that people are using drugs to be criminals. Many people begin using legal substances and convert to illegal substances because of availability or price.

8. People become addicts because they only care about themselves.
Inherently, addiction is a selfish behavior because it takes over one’s life. For the addict, substance becomes priority number one. But it doesn’t start this way. The brain becomes reliant on the flood of dopamine, a naturally-occurring pleasure compound produced in the body. After being flooded with drug-induced dopamine, the brain “forgets” how to produce it on its own. This drives a person to take more of the substance just to feel normal. It becomes, literally, a battle between a person and his or her own mind.

9. People who become addicts are trying to avoid responsibilities.
The truth is quite the opposite. This myth most likely is derived from the idea of substance use as an “escape.” But often, people start using substances more and become addicted in order to function. With a drug like speed, for example, a person will get hooked on the extra energy kick and feel that they need the extra help to get work done.

10. Once an addict, always an addict.
This is the worst one. This myth holds the idea that a person is destined to be an addict, that once you are addicted to drugs you can never lead a normal life, that you are an addict forever. This is not true at all. With the right support from friends and family, or from finding the right rehab, everyone has the right and power to reclaim their life. Buying into this kind of myth only hinders one’s progress.